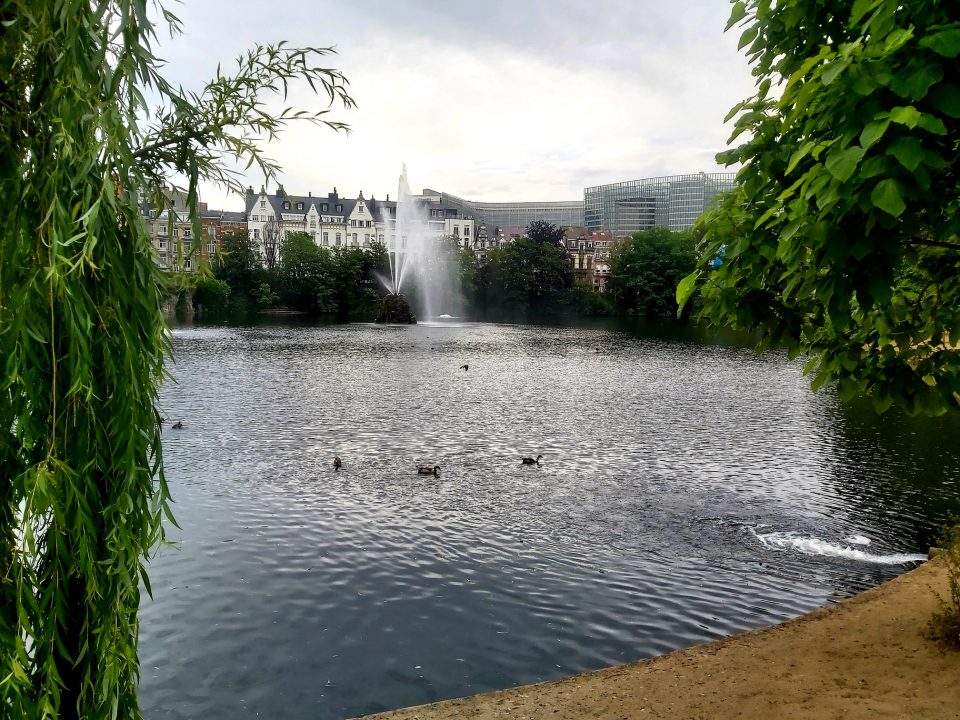 Feel like exploring the Maelbeek valley together? Sample the culture and nature that Brussels has to offer from your saddle. We will leave from Square Gutenberg this time, passing wonderful parks, lively squares and impressive buildings. Honestly, you’re in for a treat! Pumped up your tyres? Off we go!

We get off to a flying start at Square Gutenberg, where the contrasting features of Saint-Josse-ten-Noode and the European district almost collide. Don’t forget to admire the splendid Art Nouveau architecture as you cycle past.

Small squares, spacious houses with picturesque façades and the impressive high-rise buildings of the European institutions: you’ll find it all here. As a result, this district is a good example of the patchwork that makes up Brussels.

The Maelbeek brook still babbled through here in 1850, but today things have changed. We cycle past handsome office buildings from the 1970s, past the European Commission, under the Rue de la Loi overpass and past the Maelbeek metro station.

It’s hard not to admire this beautiful complex of luxury apartments in Art Deco style. A little further on, we pass the Council of the European Union on the left. For many Brussels locals, this building is the ugly sister of the European district. Something to talk about as you cycle past!

Be sure to stop at Leopold Park. The entrance pavilions still bear the inscription “Jardin Royal de Zoologie”. From zoo to science park: this park has seen a lot of people pass through over the years. Now you’ll find the House of European History here, as well as an attractive pond and some peace and quiet, among other things.

Place Flagey is one of the beating hearts of Ixelles. The former radio station in the shape of a steamship still serves as a media building for BRUZZ today. The Portuguese quarter lies behind and to the right of the Flagey building. Say hello to the poet Fernando Pessoa – or at least his statue – as you cycle past.

You aren’t allowed to swim here, so just keep cycling. But do admire the beautiful Ixelles Ponds, the greenery and all the architecture with touches of Art Nouveau and Modernism.

In your search for the source of the Maelbeek, this abbey is definitely worth a short detour. After the Cistercian nuns left, the prestigious École nationale supérieure des arts visuels de la Cambre and the National Geographic Institute moved in here.

Ter Kamerendalsquare or Square du Val de la Cambre – it sounds so much nicer in French, right? We are now cycling through one of the residential areas of the Brussels elite. Looking – and dreaming – is definitely allowed.

Feel free to shift down a gear, because we are now cycling along l’Avenue de la Folle Chanson. A true Art Deco gem, with one impressive apartment building after another.

We are now cycling through Rue Vanderkindere. Need a little refreshment? Treat yourself to a nice ice cream or a pint of Gueuze, a good Brussels beer. You’ve earned it. Cheers!

Say “bonjour” to the chic Uccle municipality with its stately houses, parks and embassies. This street is currently one of the most expensive streets in Brussels.

We are now cycling towards Place du Châtelain, much loved by French expats in Brussels. And the large car park that you can see here will soon be put to a different use. Tip: Take a photo, do this bike ride again next year and see if you can spot the differences.

We are cycling along Rue du Bailli, a high-quality shopping street that will take you to Sainte-Trinité. The façade of this church was moved stone by stone from Place de Brouckère in 1893.

Hidden behind the Maison de la Solidarité you will find an attractive park. If you cycle past Parc du Viaduc, you’ll discover a new walking and cycling promenade along the train tracks. Highly recommended for later, but for now we’ll just keep on pedalling!

The trail of the dinosaurs

From a safe distance, follow the BONOM dinosaur skeletons to the entrance of the Natural History Museum. In June 2022, they were in the colourful company of the frescoes of director and illustrator Rocío Álvarez for the 50th anniversary of Greenpeace. Happy Birthday!

A demonstration, a breakdancing rehearsal or an organic market: there’s room for everything and everyone on Place du Luxembourg. And if you want to find Luxembourg station, you’ll have to look closely: only the old façade remains. The new station is located underground with the offices of MEPs and their staff above it.

Rue de la Loi isn’t just home to the Belgian government and European institutions: it’s also the place where it all started, the start of a true cycling revolution. The duplicate cycle path on the left-hand side has now been removed.