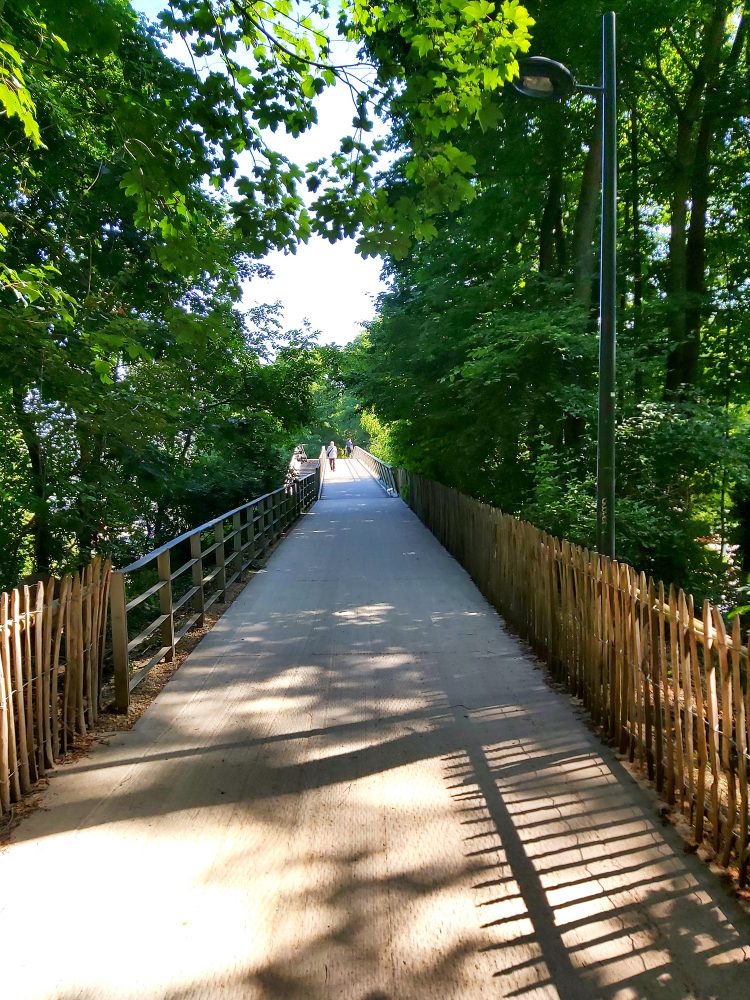 Want to immerse yourself in nature without straying too far from the city? Let us treat you to a fresh portion of greenery on our latest Bike Route. Discover the hidden corners of Woluwe-Saint-Lambert and Woluwe-Saint-Pierre as you pedal. The route starts at Parc Georges Henri. Along the way, we pass many other parks, a castle, a roaring lion and… windmills? 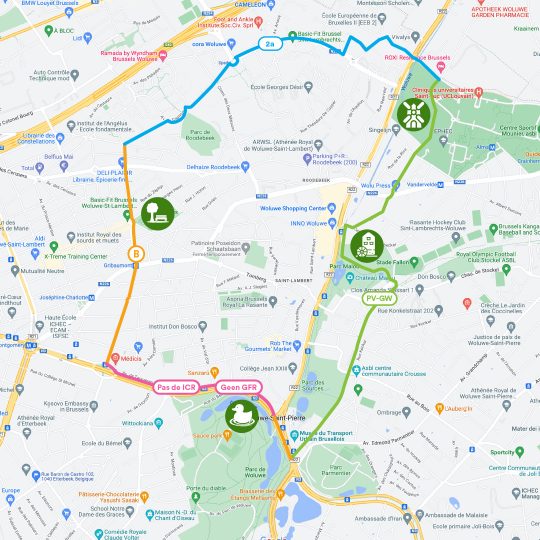 Start at Parc Georges Henri B (orange) and cycle south on Avenue Louis Gribaumont to Leopold II Square.
Then turn left and follow the cycle path on Avenue de Tervueren to Woluwe Park.
Cycle through Woluwe Park to the Promenade Verte (Green Walk).
Turn left here, past Malou Park to Hof Ter Musschen.
Follow route 2A blue (which partly runs alongside the Green Walk) to route B (orange) on Avenue Heydenberg, and finally turn left at Parc Georges Henri.

What was once a cemetery is now one of the liveliest places in Woluwe-Saint-Lambert, with something for everyone: a sunbathing area, an outdoor gym, a cool summer bar (where you can end this tour on a refreshing note 😉), a skate park and one of the best playgrounds in Brussels. A nice detail: some of the old tombstones have been given a new life as walking paths.

Enjoy a delightful ride down the cycle path between the trees on the prestigious Avenue de Tervueren. For more greenery and somewhere to get out of the sun for a while, turn right into Woluwe Park towards the Green Walk.

We are now cycling along the first part of the Green Walk. The route was built in early 2000 on the former railway line between the Leopold Quarter and Tervuren. In the past, it was used by the bourgeoisie to travel to the colonial part of the 1897 World’s Fair.

The bridge is the crown jewel of the first section of the Green Walk. The new bridge is more elegant and lighter, as only cyclists and pedestrians use it these days. Be sure to enjoy the wonderful view of the Mellaerts Ponds, Parmentier Park towards Tervuren, Woluwe Park and the Tram Museum towards the city.

The small station has been replaced by children’s play equipment. Further on, you will find dancing rails as a nod to the location’s railway past.

Caution: Don’t follow the former railway line blindly as otherwise you will end up in Stockel. We are following the Green Walk, which bends significantly to the left at Stade Fallon (sports complex).

In the park, you’ll find a castle that dates back to 1776. Prime Minister Jules Malou lived there in the 19th century, hence the name of the castle and surrounding park. The ponds are fed by the Woluwe.

If you want to see a roaring lion, you don’t necessarily need to go to Waterloo. They also tamed one especially for Expo 58 in Woluwe-Saint-Lambert!

A watermill by the babbling Woluwe: it’s hard to imagine a more picturesque sight! The mill dates back to 1129 and was used to make paper and grind grain. This mill and the Nekkersgat mill in Uccle are the only remaining watermills in Brussels.

Caution: We will keep following the Green Walk, but the cycling and walking paths separate here. We will cycle through the meadows to a windmill.

Yes, that’s right: another mill. This one was built in the 18th century in the region of Tournai and was moved to the fields of Hof ter Musschen in the 1960s. And you can still visit the mill today, thanks to the millers of the Luizenmolen non-profit organisation from Anderlecht. Be sure to hop off your bike here – it’s well worth it.

This forest park was owned by the Jesuits in the 18th century. In 1778, the owner of the Château Malou bought four plots. In the 19th century, sand and stone were extracted here and the park has been open to the public since 1948.