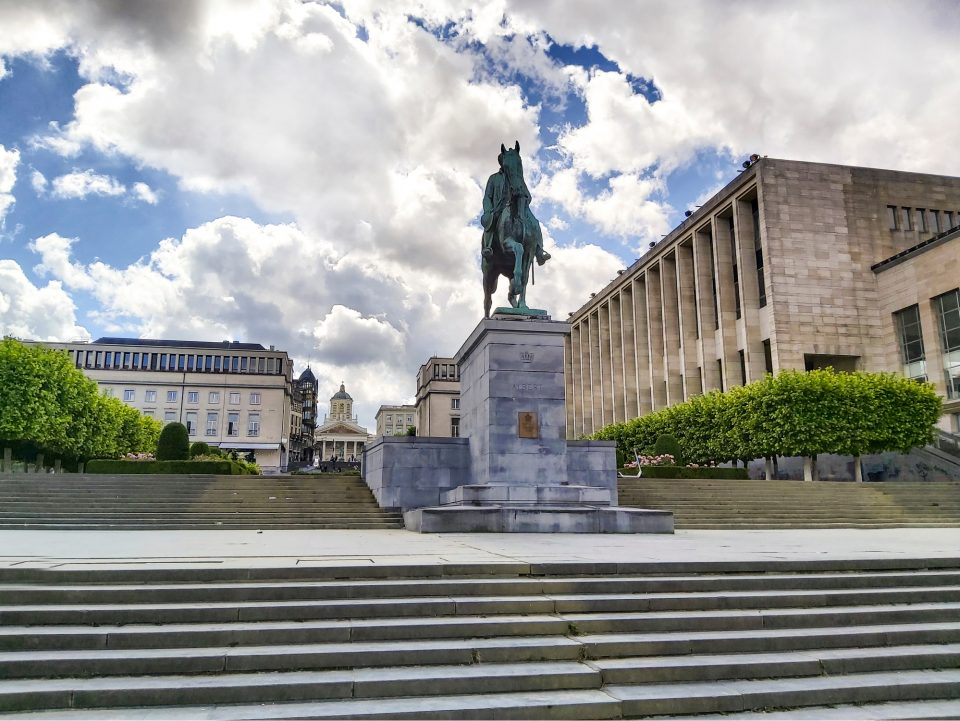 Experience the essence of Brussels in a single ride with this Bike Route right through the centre! We climb up and over the Mont des Arts, skim across the Jeu de Balle Square in the Marolles quarter, visit Brussels South station and soak up the atmosphere at the Marché aux Poissons. In short, we visit all the lively spots in a single route. Along the way we encounter a whole host of other places. 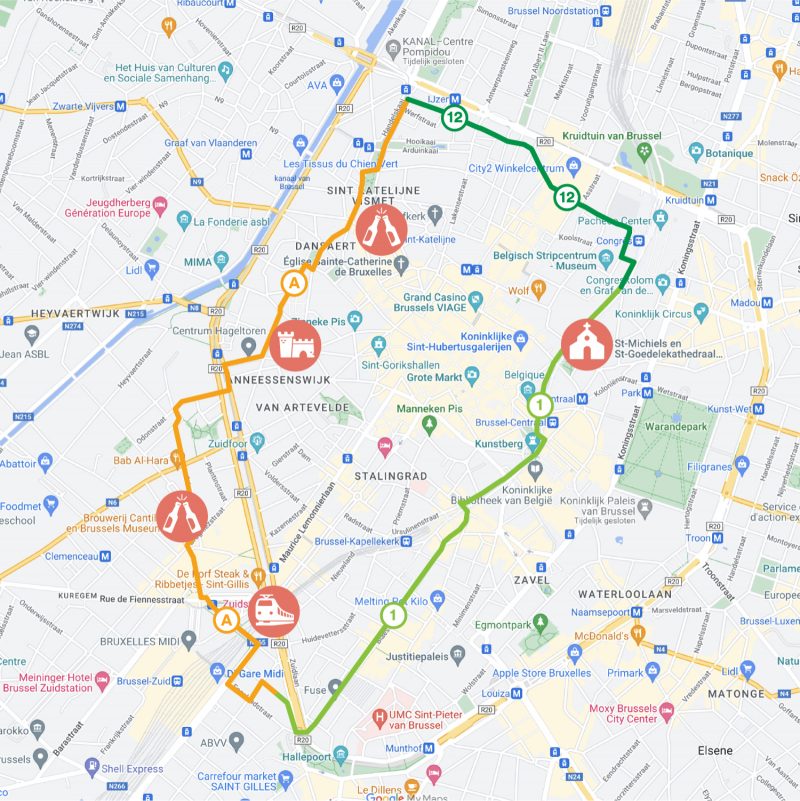 First follow 1 green to the Halle Gate.
Then turn right at A orange up to Rue de Laeken.
Then follow 12 green up to Boulevard Pacheco.
And turn right at 1 to Central Station.

We start at the Cathedral of St. Michael and St. Gudula, Brussels’ most important church. Fascinating fact: a pair of peregrine falcons nests in the tower every year.

We freewheel downhill to Central Station and the Carrefour de l'Europe. The art deco station, designed by Victor Horta, was mostly built underground, and its construction in the 20th century left a trail of destruction through the city centre.

We climb the Mont des Arts with its gleaming statue of King Albert I on horseback. To his right is the Royal Library of Belgium, the ‘Albertina’. On the far right you see a glass square, the entrance to the Square conference hall. At the very top of the hill we see the church on the Place Royale, and to its left is the Musical Instrument Museum, housed in a stunning art nouveau building.

Anneessens Tower in the Marolles quarter

We ride past the almost 900-year old Annessens Tower, one of the many remnants of the first city walls (c. 1100) which has never been demolished. The tower with its wrought iron embellishment and bricks is a fanciful, romanticised 19th-century restoration completed when Charles Buls was mayor of the city. Standing beside Annessens Tower is a relic from the 1950s: a bowling alley.

We cycle over the cobbles into the Marolles quarter. There is a ‘Marché aux Puces’ or flea market here almost every day of the year. During the weak you can get some good deals with a little haggling. At the weekend there’s a delightful atmosphere thanks to the many bars, lunch spots and art galleries in the narrow streets around the square.

We pedal in style to the 800-year-old remnant of the city walls: the Halle Gate. This used to be a prison, but these days the only thing it’s keeping behind bars is the City of Brussels museum. It’s also surrounded by an attractive park.

Next stop: even more art deco at Arts & Métiers, a historic school building for technical and vocational education. Right beside it is the new Porte de Ninove park on the boundary between Molenbeek and the City of Brussels. It provides a green lung for the densely-populated quarter beside the canal.

Towering above us now is the Tour à Plomb. Formerly an industrial building, it is a sports and cultural centre today.

The Five Blocks and Brecht Evens

We cycle on to the Rue du Rempart des Moines, home to the Five Blocks. A mural by the Brussels cartoonist Brecht Evens takes pride of place on a wall opposite the dilapidated social housing blocks in the Rue du Rempart des Moines. The Five Blocks will soon be demolished to make room for new social housing on a more human scale.

Officially this is just the area between the Quai aux Briques and the Quai au Bois à Brûler, but in the local vernacular it has been known for centuries as the Marché aux Poissons. That’s because when part of the 16th-century canal to Willebroek was drained, there used to be a fish market beside St Catherine’s Church. The Anspacht Fountain you see here was relocated from Place de Brouckère during Expo 58. Crazy!