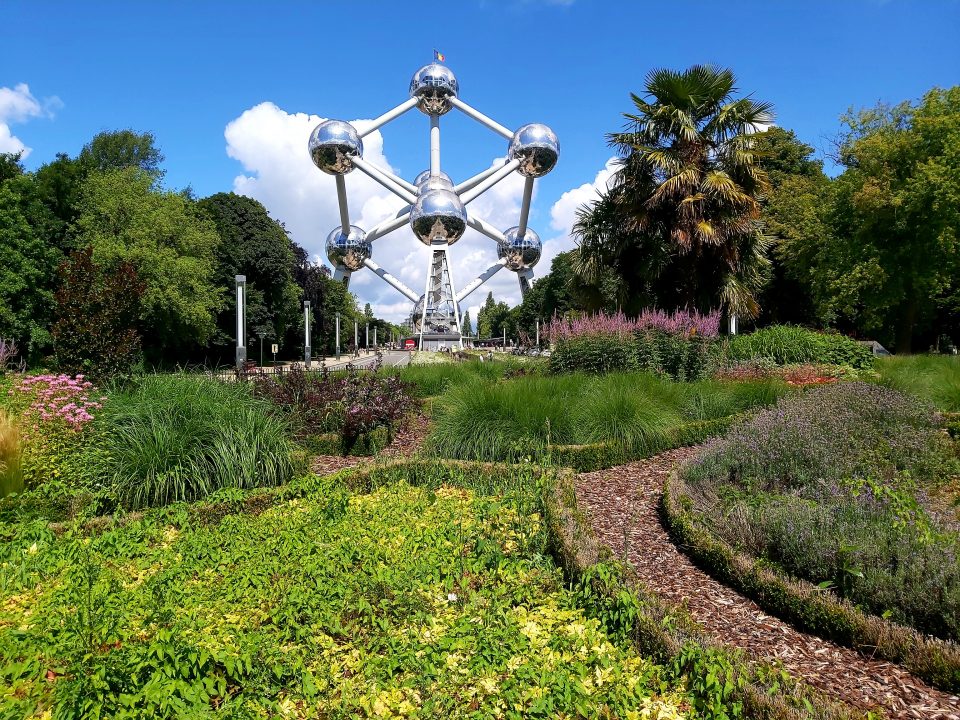 This bike tour is the crème de la crème of the bike routes. On this nearly 14-kilometre bike tour, we’ll guide you through the Royal Greenhouses of Laeken. So, expect to take several stunning breaks during this tour. We’ll begin at Gaucheret Park before passing, among others, the Atomium, Tour & Taxis and the Japanese Tower. Ready, set, cycle! 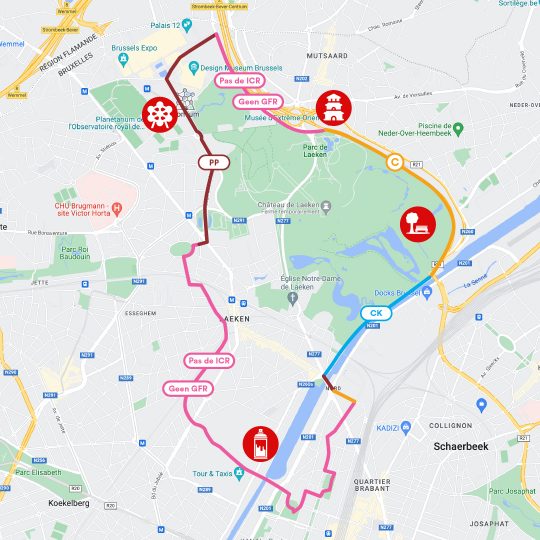 Start off at Gaucheret Park, cycle down Rogierstraat and then exit to the left. Cycle over the Antwerpsesteenweg before crossing over to the Groendreef.
Cross the canal via Reders Bridge. Next, transverse the length of Tour & Taxis Park and Pannenhuis Park, then continue cycling until you reach Bockstael Square.
Now follow route PP (brown) past the Atomium and Heysel Palace until the end.
Then follow route C (orange). Madridlaan will turn into Van Praetlaan. Keep following this past the Van Praet Bridge (CK blue) until you reach the Trooz Bridge.
Cross the bridge via route B (orange) until you reach Zenne Park.
Lastly, continue through Zenne Park until you reach Gaucheret Park.

We’ll start at Gaucheret Park, the green lungs of the Masuiwijk. As you’re cycling, take in the impressive view of the iconic Brussels Manhattan. Built in 1972, the tower stands 28 floors tall or 102 metres. For fans of Hoodi, it’s better known as 'the Pit'.

We’ll cycle through Maximilian Park. The name might ring a bell, as the park attracted a lot of media attention in 2015 due to the refugee crisis.

We’ll continue cycling past social housing blocks and flats owned by private developers. The Up-Site Tower along the Reders Bridge is the tallest residential tower in the country at 143 metres.

Allée du Kaai is home to some thirty organisations and is a free zone for graffiti and youth culture on the canal. Brussels at its best, and well worth a visit.

The port of Brussels

We’ll travel along the port of Brussels, strategically located between the canal, the new port and the Maritime Station. Need a short break? Set your bicycle to the side and watch the boats.

The Tour & Taxis site, a former goods station, has undergone a serious makeover over the past ten years. And every building is worth a visit. To the left, you have the Royal Depot (with offices, a hammam, restaurants and design shops), the Sheds (with exhibitions and a circus school) and the Maritime Station (with large wooden modules and a food market). To the right, you’ll see the Herman Teirlinck building (Flemish Government), the Bruudruuster (Leefmilieu Brussel) and, further on, the Brasserie de la Senne. Sounds good, right?

Via the Tour & Taxis Park, we’ll cycle past the charming greenhouse of Parck Farm, the place for workshops on sustainability, refreshing organic drinks, good food and lovely vegetable gardens. Attention! Helmets on, the Jubileum Bridge has been known to crumble! Then, we’ll promenade through the greenery along line 28 and Pannehuis Park.

For the steep incline towards Bockstael Square, it is best to dismount your bicycle. For those who dare the climb: good luck! Today, the prestigious Art Deco town hall of Laeken is home to, among others, the House of Creation.

The Atomium and Heysel Plateau

We’ll ascend on our bicycles to the Atomium, proceed past Ossegem Park and the Green Theatre — both worth a visit — then cruise by the Heysel Plateau which has the Centenary Palace and the King Baudouin Stadium. As you’re leaving the Heysel Plateau, be sure to catch a glimpse of the Royal Palace and its beautiful greenhouses.

The Chinese Pavilion and the Japanese Tower

The statue of Poseidon brings us to the Chinese Pavilion and the Japanese Tower. They were commissioned by order of King Leopold II. These architectural gems used to house many art treasures, but are now closed for security reasons.

We’ll descend following the walls of the royal estate, which is almost as big as the Pentagon. Moving past the Van Praet Bridge, Dockx Bruxsel — the new shopping centre across from the canal — is not to be missed.

We’ll cycle around the royal estate until we reach the Trooz Bridge. On the right, we’ll see a beautiful mural of George Floyd. NovaDead, a Brussels graffiti artist of Congolese origin, created the mural as a tribute to all the victims of racism and discrimination.

Zenne Park, a succession of three charming little parks on the former Zennebedding, brings us via the Soleil du Nord Community Centre back to Gaucheret Park.