Pedal along the canal 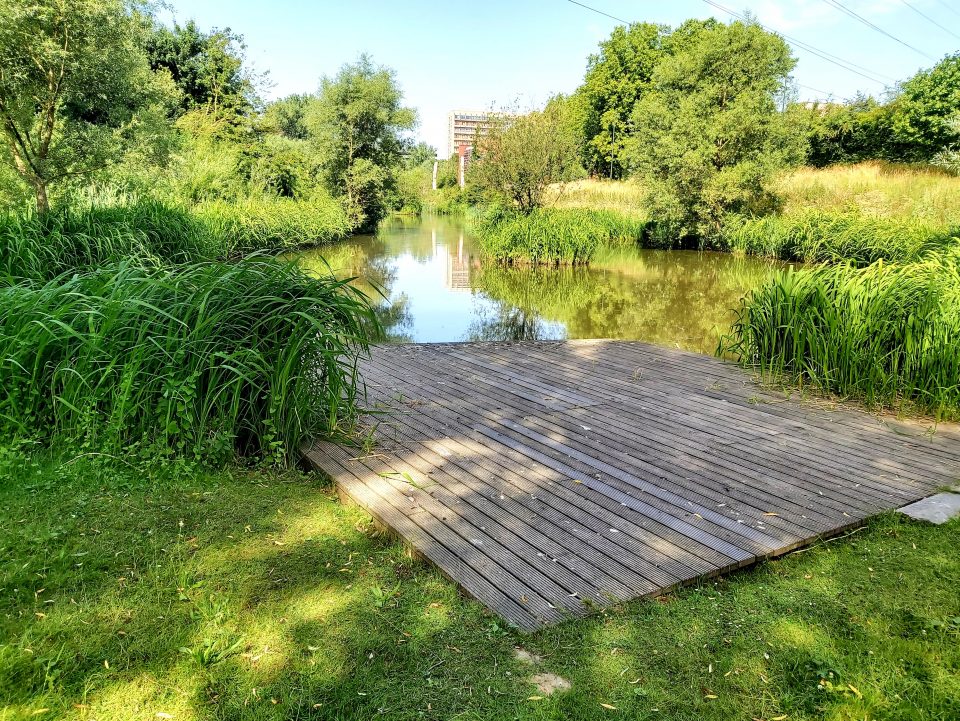 Cycle from the COOVI campus to the Erasmus Hospital, along the Flemish border. Cheer on R.S.C. Anderlecht, fill your drinks bottle at the Brussels Beer Project on the canal and take a dip in the FLOW outdoor swimming pool. 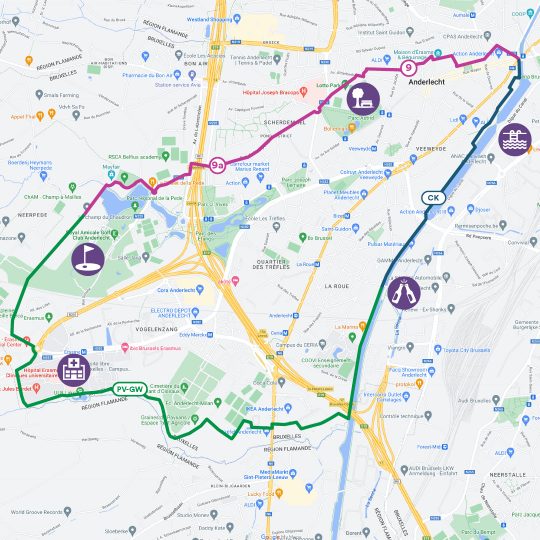 Regional Cycling Routes (GFRs) used
Follow the Cercle des Regates de Bruxelles / COOVI, KC grey–blue route to the Groene Wandeling (Green Walk).
Follow the Green Walk to Postweg / Wybran, 9A rose.
From here, cycle via the 9, past the church and Erasmus House to the canal.
Then simply follow the KC grey–blue KC route back via the canal to COOVI.

Forewarned is forearmed. So this text contains additional information about your route and lets you know when it’s best to keep your eyes open. The information is always indicated with warning signs and in italics so that it really stands out. You have been warned!

Our fourth Bike Route starts at the campus of the Food and Chemical Industries Education and Research Center (COOVI). Nearby, you will find the welcoming garden suburb Het Rad, as well as the local kayak club by the water.

We leave the diligent students behind us and follow the Green Walk along the Vogelzangbeek (Birdsong Brook). If you listen carefully, you’ll be able to hear the birds singing. And if you’re lucky, you might even hear them rapping.

We now pass the football pitches of FC Anderlecht-Milan, not to be confused with R.S.C. Anderlecht or A.C. Milan. It was set up by fans of these teams, but that shouldn’t detract from their own football skills!

The football pitches give way to allotments where many local residents grow fruit and vegetables in their own little garden.

Keep your eyes open when we enter the meditation stretch! As walkers aren’t usually as fast as cyclists, the paths here along the Vogelzangbeek are sometimes separated.

If you’re afraid that a lost pedestrian might end up under your wheels, you can relax as we are now passing the Erasmus Hospital. If you don’t find the bombastic complex particularly pleasant to look at, you can admire the beautiful ponds on the left among the greenery.

For the geography fans and Flandriens (a nickname for tenacious, passionate cyclists) among us: behind those ponds is Flanders. So if you want to turn it into an interregional route, you only need to make a 10-metre detour!

It’s a good thing we’re all wearing helmets as we pass Anderlecht’s golf club. Watch out for stray balls!

We are now following GFR 9a, but the route is not really clearly marked. So keep an eye on the map here!

It’s best to keep an eye on the road as we approach a concrete Jersey safety barrier that prevents cars from entering this country road.

After the concrete barrier, look safely to the right and admire the greenhouses of the ‘Ketelveld’. This is an organic farm that grows fruit and vegetables with an emphasis on respect for nature.

We end up at the Neerpede ponds, where you will be able to swim freely in 2024. And if you can’t wait that long, you can always make a free reservation for a dip in FLOW. We will be passing this outdoor swimming pool later.

Next stop is Astrid Park, a hilly park with a view of Brussels on one side and the RSCA stadium on the other.

Head downhill through Porseleinstraat and then slow down a little to take in the picturesque façades in this street, while the Sint-Guidokerk comes into view ahead. Looks perfect on a porcelain plate!

We are now arriving at the square known as the Dapperheidsplein, in the shadow of the church. Here, you’ll also find numerous 19th-century architectural highlights, a music academy and the De Rinck community centre.

One street further on, you’ll see the Erasmus House on your right. A stately specimen with a splendid garden where Mr Erasmus probably came up with much of his philosophical wisdom.

Verzetsplein and the Justice de Paix

We say goodbye to Erasmus and end up at the former Justice de Paix (Peace Court), which overlooks Verzetsplein (Resistance Square). An interesting fact: on the façade of the old Peace Court, you can still see the municipalities over which the justices of the peace were able to exercise their powers. And here’s another one: the French fries on this square are well worth a try!

With or without French fries in your stomach, we now ride on to the waters of the Biestebroekkaai. A historic corner of the Brussels–Charleroi Canal, which will soon accommodate 5,000 new housing units thanks to a new construction project.

The brewery of the Brussels Beer Project is a project that’s somewhat more appreciated by the local residents. Want something different from your average pint? In the latest experiment by the brewery, you can have your drinks bottle filled up at the tap here!

Bike problems? At Elastik, volunteers will help you fix your bicycle. The parts are the only thing you need to pay for. There’s also a new park next door, if you haven’t had enough fresh air yet.

FLOW and the Marchant Bridge

After a refreshing visit to the brewery, how about an equally refreshing dip in FLOW? If you’ve booked for free, that is! Brussels’ first open-air swimming pool was created by Pool is Cool. A little further along the canal, you’ll find the dilapidated Marchant Bridge. Thanks to the social activities organised on this bridge, it also forms a figurative link between the two banks.

As we are now cycling along the canal, we can also make a short detour along the Zenne. This is tucked away behind Lucerna primary school and the office complexes next door.

Going back along the canal, we will come to Lock 10. This lock can simultaneously accommodate two boats wishing to continue their journey to Antwerp, Brussels or Charleroi.

And then we finally arrive back at COOVI, having learnt a lot about Brussels – without even setting foot in college.

Well done – move to the front of the class! 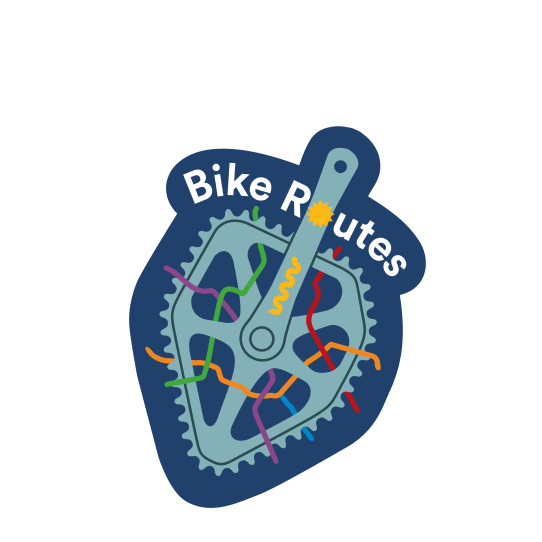